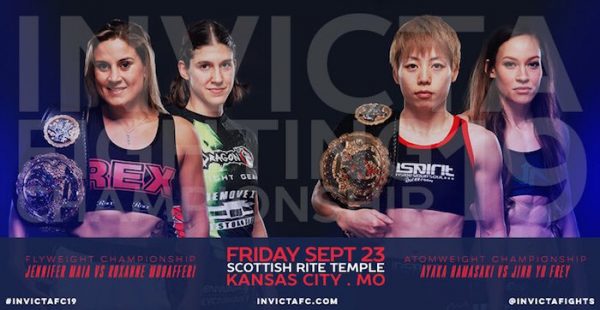 Invicta FC will be returning to the Scottish Rite Temple in Kansas City, Missouri on Friday, September 23 for Invicta FC 19 and the event will be headlined by two title fights.

In the main event of the fight card, interim flyweight champion Jennifer Maia will defend her title against Roxanne Modafferi and the co-main event will be an atomweight title fight as champion Ayaka Hamasaki will make her second title defense as she is challenged by Jinh Yu Frey.

Maia (13-4-1) won the interim Invicta FC flyweight title in March when she defeated Vanessa Porto by unanimous decision at Invicta FC 16. She is currently on a four fight winning streak and her last two wins have come by decision. Modafferi (19-12) has won four of her last five fights and is coming off a split decision win against DeAnna Bennett at Invicta FC 16. Three of her last four wins have come by decision and two of those victories are by split decision.

Hamasaki (13-1) is currently on a four fight winning streak and became the Invicta FC atomweight champion last year when she defeated Hérica Tibúrcio by split decision at Invicta FC 13. She is coming off a successful title defense against Amber Brown in March and seven of her thirteen wins have come by stoppage. Frey (5-1) has won her last three fights and is coming off a decision victory against Tibúrcio. Three of her five wins have come by stoppage and her two of those victories have come by decision.

Ticket information for Invicta FC 19: Maia vs. Modafferi will be released shortly by the promotion and the current fight card is below.