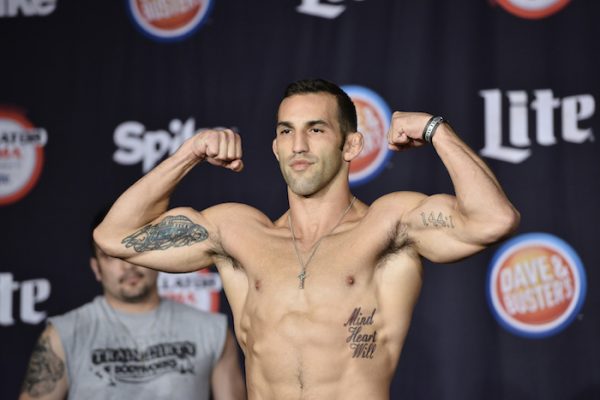 The opening bout of tonight’s Bellator 161 main card on Spike will be a lightweight bout as Derek Campos will look for his second straight victory when he meets Djamil Chan on the fight card coming from the HEB Center in Cedar Park, Texas.

Campos (16-6) is coming off a knockout victory against Melvin Guillard in February at Bellator 149 and was scheduled to meet Patricky “Pitbull” Freire in the main event of Bellator 152 in April. The fight with Pitbull would end up being canceled when Campos had to pull out of the fight with an injury and he will now look for his 17th career victory when he meets Chan.

The Bellator debut of Chan took place earlier this year at Bellator 153 and while he may be unknown to a majority of Bellator fans, Campos is very aware of his abilities and he explained on Wednesday’s edition of “The MMA Report Podcast” that fighting smart and explosive at the same time will be a key to a victory tonight.

“I am not one of those fighters that picks his opponents. I am not trying to be picky,” Campos said. “They offer me a guy. I am going to look at him and if it’s not some chump that they are feeding to me, I don’t want that crap. I look at Djamil Chan. I had seem him before on the roster when they added him and I know he is a game opponent. I told Rich [Chou], count me in. It’s going to be a good fight.”

“Pretty much bring real explosive,” Campos continued about Chan. “Bring power. Pretty much, I am going to have to fight smart, but fight explosive at the same time. I am going to wear him down and try to capitalize off any mistakes he may make.”

Check out Campos complete interview from Wednesday’s episode of “The MMA Report Podcast” below and be sure to subscribe to the show on iTunes and Stitcher.