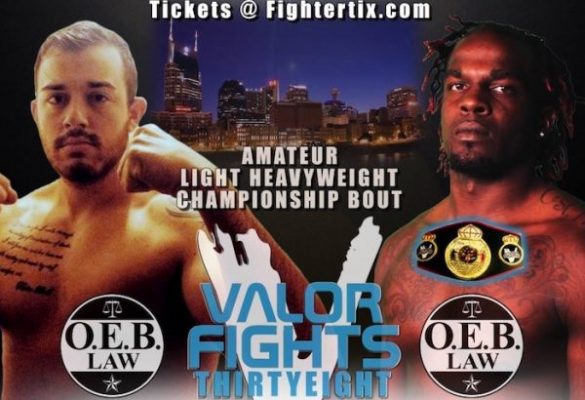 A title fight has been added to next month’s Valor Fights 38 in Nashville, Tennessee as James Garmany will defend the amateur light heavyweight title against Logan Woods.

The fight booking was announced by Valor Fights on Monday.

Valor Fights 38 will come from the Nashville Fairgrounds Arena on November 5 and will be headlined by Zack Hicks meeting Nick Gehrts in a catchweight bout of 150 pounds.

Garmany (5-0) made his amateur debut last year at Valor Fights 28 and all of his wins have come by TKO/KO. His most recent fight came in August at Valor Fights 37 as he defeated Travis Gregoire to retain the Valor Fights amateur light heavyweight title.

“I think Logan is pretty tough and he’ll give me a tougher fight than a few of my other opponents have so far,” said Garmany. “But I don’t see it going past the second round. I’m going to end it in the second round, for sure.”

Woods (6-0) is coming off a stoppage victory against Brian Gurley at Summit FC in July and five of his six victories have come by stoppage. This will be his first fight in Valor Fights and he is predicting a first round finish.

“I don’t think he has anything for me,” Woods said. “I’m going to end it in the first round, and I’m going to win the belt.”