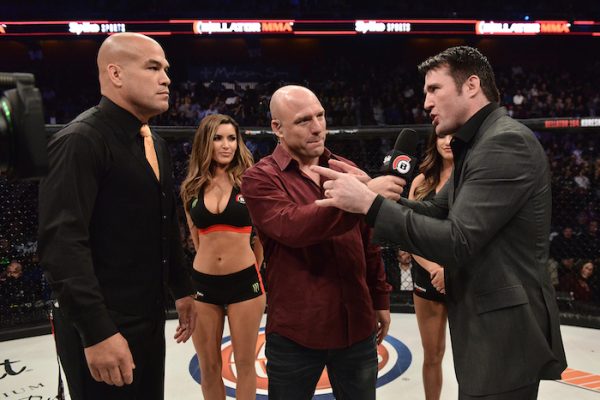 The first Bellator event of 2017 will take place on Saturday night in Inglewood, California as Bellator 170 will come from The Forum and will be headlined by a light heavyweight bout as Tito Ortiz steps into MMA competition for the last time when he meets Chael Sonnen.

The matchup between Ortiz and Sonnen will be one of five matchups on the main card on Spike (9 p.m. ET/6 p.m. PT) and the most exciting matchup on the card is the co-main event as Brennan Ward will look to continue his rise up the Bellator welterweight division as he meets Paul Daley.

Prior to the main card on Spike, the preliminary card on Bellator.com (6:30 p.m. ET/3:30 p.m. PT) will feature several notable matchups and showcase talent that train in the state of California. Some of the notable matchups include Chinzo Machida vs. Jamar Ocampo, Jack May vs. Dave Cryer, Henry Corrales vs. Cody Bollinger, Kevin Casey vs. Keith Berry and Guilherme Vasconcelos vs. John Mercurio.

Tito Ortiz (18-12-1) vs. Chael Sonnen (28-14-1)
“The Huntington Beach Bad Boy” will look to leave MMA competition on a high note when he meets “The American Gangster” in the main event of Bellator 170. Since entering Bellator in 2014, Ortiz has gone 2-1 and enters this fight following a submission defeat against former Bellator light heavyweight champion Liam McGeary.

Bellator 170 will mark the promotional debut of Chael Sonnen as he signed with the promotion last year and this will be his first fight since losing to former UFC light heavyweight champion Rashad Evans. Since 2010, Sonnen has gone 4-4 and two of his last three victories have come by submission.

Paul Daley (38-14-2) vs. Brennan Ward (14-4)
After having his last fight scratched by the commission following the weigh-ins, Paul Daley returns to the Bellator cage and this will be his first fight since losing a decision to current Bellator welterweight champion Douglas Lima. Prior to that defeat, he had won five in a row and four of those wins came by TKO/KO.

Ward is known as one of the most exciting fighters in Bellator to watch and this will be his fourteenth fight in the Bellator cage. Six of his last seven fights have ended in the first round and he is coming off a knockout victory against Saad Awad at Bellator 163.

Ralek Gracie (3-0) vs. Hisaki Kato (7-2)
After being on the sidelines since 2010, Ralek Gracie returns to mixed martial arts competition as he will meet one of the top middleweights in Bellator. His last fight came at Dream 14 against Kazushi Sakuraba and two of his three victories have come by submission.

Hisaki Kato will be looking for his third straight victory and improve to 3-1 in Bellator when he meets Gracie on Saturday night. All of his career victories have come by TKO/KO and he has never gone to a third round in a fight.

Emmanuel Sanchez made his Bellator debut in 2014 and his last four fights have ended by split decision. He enters Bellator 170 following a defeat against former Bellator title challenger Daniel Weichel and the defeat snapped a three fight winning streak.

Derek Anderson (14-2) vs. Derek Campos (17-6)
After having his last fight canceled following weigh-ins due to his opponent being pulled from the card by the commission, Anderson returns to the Bellator cage and will be looking for his third straight victory. Both of his recent wins have come by decision and the most recent victory came in August at Bellator 160 against Saad Awad.

Just like Anderson, Campos enters this fight following back to back victories and he is coming off a decision victory in September at Bellator 161 against Djamil Chan. Campos will be looking for his seventh win in Bellator and two of his last three wins have come by knockout.

The current Bellator 170: Ortiz vs. Sonnen fight card is below.