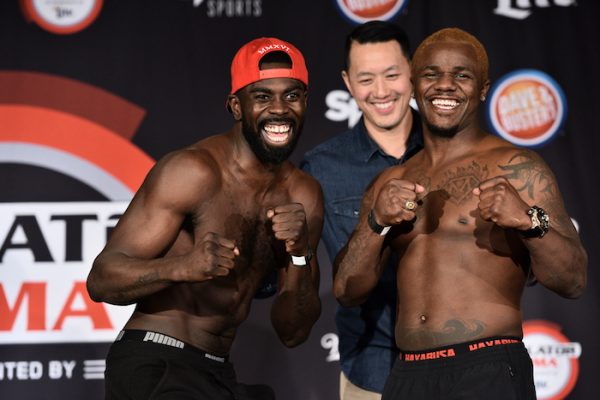 Bellator MMA is returning to the Kansas Star Arena in Mulvane, Kansas tonight for Bellator 171 and the fight card will be headlined by a catchweight bout of 180 pounds between striking specialist as Melvin Guillard returns from suspension to meet Chidi Njokuani.

Along with the catchweight bout in the main event, the co-main event will feature the return of Kansas own David Rickels as he will meet Aaron Derrow in a lightweight bout. The rest of the main card will see undefeated featherweight prospect A.J. McKee meeting Brandon Phillips and Jessica Middleton will look to improve to 2-0 when she faces Alice Yauger.

Prior to the main card on Spike, the preliminary card on Bellator.com (7 p.m. ET/4 p.m. PT) will feature several notable matchups including Chris Harris vs. Jordan Young, Gaston Reyno vs. Justin Overton, Jarod Trice vs. Kevin Woltkamp, Tyrell Fortune vs. Will Johnson and Bruna Ellen vs. Carmella James.

Now let’s take a closer look at the four fights that will take place on the main card.

Melvin Guillard (32-16-2, 3 NC) vs. Chidi Njokuani (16-4, 1 NC)
Melvin Guillard will return to the Bellator cage tonight after serving a suspension handed down by the Kansas Athletic Commission last year following Bellator 159 due to a failed post fight drug test. At Bellator 159, he defeated David Rickels by knockout in the first round, but was overturned due to his failed drug test and he is 1-4, 2NC in his last seven fights.

Chidi Njokuani enters Bellator 171 following a knockout win at Bellator 167 against Andre Fialho in 21-seconds and he is 7-0, 1NC in his last eight fights. Since entering Bellator in 2015, Njokuani has gone 3-0 in the promotion and his last two wins have come by TKO/KO.

David Rickels (17-4, 2 NC) vs. Aaron Derrow (14-8)
Tonight will mark the 18th fight in Bellator for David Rickels and he is the main reason why Bellator continues to hold events at the Kansas Star Arena in Mulvane. He enters tonight’s fight card card following the no-contest against Guillard and is 2-1, 2NC in his last five fights.

After dropping five in a row in 2012 and 2013, Aaron Derrow has won back to back fights including a decision win against Nate Jolly at Bellator 130. Twelve of his career victories have come by stoppage and he has never lost a fight by submission.

A.J. McKee (6-0) vs. Brandon Phillips (6-2)
A.J. McKee is consider one of the best and maybe the best prospect currently signed by Bellator and he will look for his seventh victory in Bellator against Phillips. In his last fight, he made it out of the first round for the second time in his career as he scored a decision victory against Ray Wood.

Brandon Phillips made his Bellator debut last year at Bellator 159 and scored a decision victory against Chuka Willis. Since that fight, he took a fight outside of the promotion at World Series of Fighting 33 in October and was submitted by Bryce Mitchell.

Jessica Middleton (1-0) vs. Alice Yauger (4-4)
Jessica Middleton went undefeated in the amateur ranks and was signed by Bellator last year. Her mixed martial arts debut came at Bellator 159 and she scored a decision victory against Bruna Ellen.

Alice Yauger will make her Bellator debut tonight against Middleton and she enters this fight following back to back victories. Both of those victories came by decision and she is coming off a victory against Roxanne Ceasear at Xtreme Knockout 31.

The current Bellator 171: Guillard vs. Njokuani fight card is below.