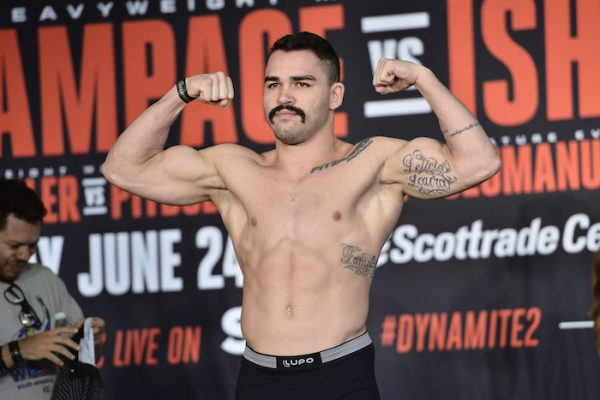 Speaking of free agency, what’s the latest with Ryan Bader? Has Bader officially signed with Bellator MMA? While UFC President Dana White says Bader is gone, the Ultimate Fighter 8 winner stated on Tuesday that it’s not official and Jason tells you why you should not be surprised that Bader is heading to Bellator.

Also on this episode of the podcast, Jason talks about some of the latest fight bookings in mixed martial arts and has seven fighter interviews. First, Jason speaks with UFC heavyweight Curtis Blaydes about his victory this past weekend at UFC Fight Night 104 against Adam Milstead. Curtis talks about his dominating victory, should a corner stop the fight, changes in his training and what he has planned for his upcoming birthday.

Following the interview with Blaydes, Jason is joined by Bellator lightweight Patricky “Pitbull” Freire to preview his fight next week in the co-main event of Bellator 172 against Josh Thomson. Pitbull talks about his training partners for this fight and what he needs to do to walk away with a victory next week in San Jose.

Then Jason turns his attention to next week’s CFFC 63 as he is joined by Bill Algeo and Tanner Saraceno. Algeo previews his featherweight title fight against champion Jared Gordon and Saraceno talks about his fight against Matt Socholotiuk.

The final three interviews on this episode of the podcast is with fighters who will be part of Saturday’s Valor Fights 40 in Tennessee. Edward Massey and Zac Cooper preview their matchup in the main event of the fight card and Cole Ferrell talks about his matchup against Brandon Grimmett.

The podcast wraps up by Jason giving a quick rundown of Saturday’s UFC 208 and explains why he is interested in seeing the light heavyweight bout between Glover Teixeira and Jared Cannonier.