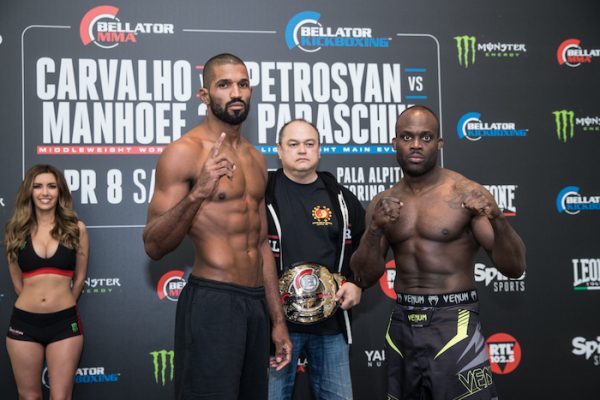 Bellator 176 takes place today at the Pala Alpitour in Torino, Italy and will be headlined by a title fight rematch as Rafael Carvalho will defend the middleweight title against Melvin Manhoef.

Along with the middleweight title rematch, the four fight card on Spike (3 p.m. ET/12 p.m. PT) will see the return of Anastasia Yankova as she will look to remain undefeated when she meets Elina Kallionidou in a catchweight bout of 133 pounds. Rounding out the rest of the card will be a pair of lightweight bouts as Djamil Chan will look to get back on track when he meets Valeriu Mircea and Mihail Nica takes on Samba Coulibaly.

Now let’s take a closer look at the four fights that will take place today at Bellator 176.

Rafael Carvalho (13-1) vs. Melvin Manhoef (30-13-1, 2 NC)
Carvalho entered Bellator in 2014 and became the Bellator middleweight champion in his third fight in the promotion as he defeated Brandon Halsey by TKO at Bellator 144 in 2015. His first title defense came in May of last year as he scored a split decision against Manhoef at Bellator 155.

Anastasia Yankova (4-0) vs. Elina Kallionidou (5-1)
Yankova trains at American Kickboxing Academy in California and has gone 2-0 inside the Bellator cage. She is coming off a split decision victory in September against Veta Arteaga and all of her Bellator fights have been catchweight bouts.

Kallionidou made her Bellator debut in December and dropped a decision against Sinead Kavanagh at Bellator 169. Prior to that fight, three of her five wins had come by TKO and four of those fights came in Cage Survivor.

Djamil Chan (12-3) vs. Valeriu Mircea (13-4)
Bellator 176 will mark the third fight in the promotion for Chan as he won his promotional debut against Richard Patishnock at Bellator 153 by TKO. He returned to the Bellator cage five months later at Bellator 161 and dropped a decision against Derek Campos.

Mircea also made his Bellator debut last year and this will be his second fight in the promotion. In his promotional debut, he was submitted by Goiti Yamauchi at Bellator 168 and the defeat snapped a six fight winning streak.

Mihail Nica (5-0) vs. Samba Coulibaly (11-4)
Today marks the Bellator debut of Nica, who was originally scheduled to face Carrington Banks. However, Banks was forced to pull out of the fight with an undisclosed injury and Coulibaly stepped up on five days notice to take the fight.