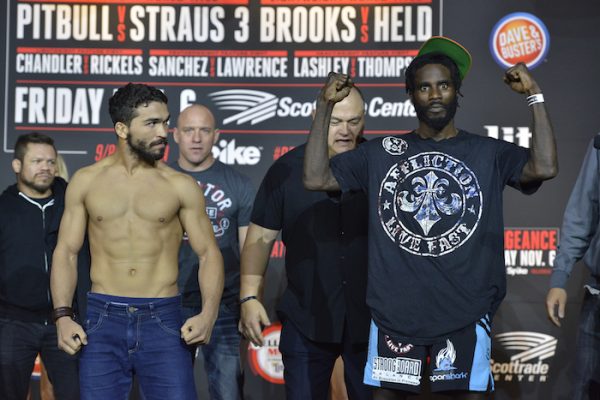 In the co-main event of the fight card, a key matchup in the Bellator women’s flyweight division will take place between undefeated fighters as Ilima-Lei Macfarlane will look for her sixth victory when he meets Jessica Middleton.

Now let’s take a closer look at the four fights that will take place on Friday at Bellator 177.

Daniel Straus (24-6, 1NC) vs. Patricio “Pitbull” Freire (25-4)
The trilogy bout between Straus and Pitbull came in late 2015 at Bellator 145 and Straus became a two-time Bellator featherweight champion with a decision victory. This will be the first fight for Straus since defeating Pitbull (1 year, 5 months, 15 days ago) and he will be looking for his third straight victory.

Just like Straus, Pitbull enters this fight following a layoff due to injury as he is coming off a TKO defeat due to a leg injury at Bellator 160 against Benson Henderson. This is the first fight for Pitbull in nearly eight months and he is 1-2 in his last three fights.

Ilima-Lei Macfarlane (5-0) vs. Jessica Middleton (2-0)
MacFarlane has been in Bellator since her second professional fight and two of her four wins in Bellator have come by submission. She enters this fight following a decision victory as she defeated Emily Ducote at Bellator 167.

Saad Awad (19-9) vs. Ryan Quinn (13-6-1)
Awad initially made his debut in Bellator in 2009 at Bellator 10 and will be looking to snap a two fight losing streak. His most recent defeat came in November at Bellator 163 as he lost to Brennan Ward by knockout in a welterweight bout.

Quinn is returning to Bellator for the first time since defeating Waylon Lowe at Bellator 140 in July of 2015 and he is coming off back to back victories. He most recent win came in October at Z Promotions: Fight Night Medicine Hat 2 as he defeated Matt MacGrath by split decision.

A.J. McKee (7-0) vs. Dominic Mazzotta (12-1)
All of McKee’s professional fights have come in Bellator and he is coming off back to back decision victories after starting his career with five straight stoppage victories. His last win came back in January as he defeated Brandon Phillips at Bellator 171.

Mazzotta has been viewed as one of the best prospects below 155 pounds not signed by the UFC or Bellator for the past couple of months. His only professional defeat came in 2012 against current UFC bantamweight champion Cody Garbrandt and he is coming off a decision victory against Solon Staley.

The complete Bellator 178: Straus vs. Pitbull 4 fight card is below.