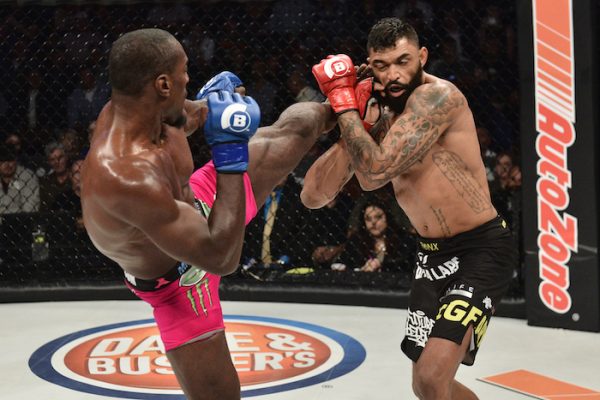 Bellator 180 takes place on Saturday at Madison Square Garden in New York City and will be headlined by a title fight as Phil Davis defends the Bellator light heavyweight title against Ryan Bader in a rematch of their matchup that took place in 2015 in the UFC.

In the co-main event of the main card on Spike, rising featherweight prospect James Gallagher will have the toughest test of his career as he meets Chinzo Machida. Also on the televised portion of Bellator 180, Neiman Gracie looks to remain undefeated when he meets Dave Marfone and Heather Hardy makes her professional mixed martial arts debut against Alice Yauger.

Now let’s take a closer look at the four fights that will take place on the main card of Bellator 180.

Phil Davis (17-3, 1 NC) vs. Ryan Bader (22-5)
Phil Davis became the Bellator light heavyweight champion in November with a decision victory over Liam McGeary and this will be his first title defense. He enters this fight on a four fight winning streak and his last defeat came against Bader by split decision at UFC on FOX 14.

Ryan Bader recently signed with Bellator and enters the promotion following back to back victories in the UFC. His most recent win came in November at UFC Fight Night 100 as he defeated Antonio Rogerio Nogueira by TKO in the third round.

James Gallagher (6-0) vs. Chinzo Machida (5-2)
James Gallagher made his Bellator debut eleven months ago at Bellator 158 and scored a decision victory against Mike Cutting. Since that fight, he has won back to back fights by rear-naked choke submission and his most recent win came in February against Kirill Medvedovsky at Bellator 173.

Chinzo Machida won his Bellator debut last year against Mario Navarro at Bellator 160 and both of his wins in the promotion have come by TKO/KO. Three of his seven fights have ended in the opening round and he is coming off a knockout victory against Jamar Ocampo at Bellator 170.

Neiman Gracie (5-0) vs. Dave Marfone (5-2)
Neiman Gracie made his mixed martial arts debut in 2013 at World Series of Fighting 5 and made his Bellator debut in 2015. Two of his three wins in Bellator have come by submission and is coming off an armbar submission victory against Rudy Bears at Bellator 163.

Bellator 180 will mark the promotional debut of Dave Marfone and he enters this fight following a TKO defeat against Stephen Regman at CFFC 63. That defeat snapped a two fight winning streak and both of his defeats have come by TKO.

Heather Hardy (0-0) vs. Alice Yauger (4-5)
Heather Hardy was initially scheduled to make her professional mixed martial arts debut earlier this year in Invicta, but that fight was scratched when her opponent pulled out of the fight. She is a Brooklyn native and is known in the boxing world as she is the current WBC international female featherweight champion.

Alice Yauger made her Bellator debut earlier this year at Bellator 171 and lost a decision against Jessica Middleton. The defeat snapped a two fight winning streak and she is 3-2 in her last five fights.

The complete Bellator 180: Davis vs. Bader fight card is below.