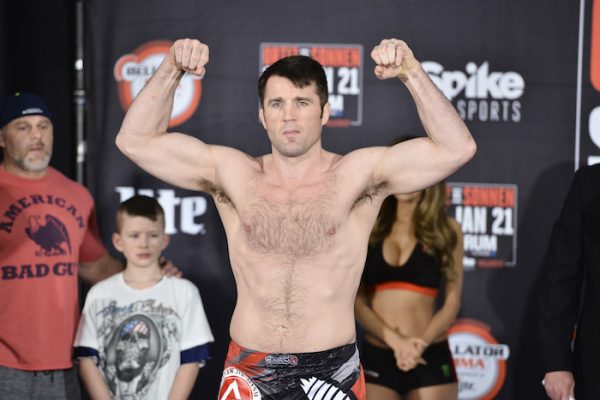 Bellator NYC takes place on Saturday at Madison Square Garden in New York City and will be headlined by a light heavyweight bout as Chael Sonnen looks for his first win in Bellator as he meets Wanderlei Silva. In the co-main event of the fight card that will air on pay-per-view, Fedor Emelianenko will make his promotional debut against Matt Mitrione in a bout that was initially scheduled to take place earlier this year at Bellator 172.

Now let’s take a closer look at the five fights that will take place at Bellator NYC.

Chael Sonnen (29-15-1) vs. Wanderlei Silva (35-12-1, 1 NC)
The feud between Chael Sonnen and Wanderlei Silva started several years ago and Sonnen will be looking to snap a two fight losing streak when he meets Silva. Sonnen lost his Bellator debut at the beginning of this year against Tito Ortiz and he is 3-4 in his last seven fights.

After being on the sidelines for four years, Wanderlei Silva will step into mixed martial arts competition and will be looking for back to back victories for the first time since 2006. He has alternated wins and losses in his last five fights and his last two victories have come by TKO/KO in the second round.

Fedor Emelianenko (36-4, 1 NC) vs. Matt Mitrione (11-5)
Fedor Emelianenko came out of retirement in 2015 and has won back to back fights since coming back. He enters this fight card on a five fight winning streak and he is coming off a majority decision victory against former UFC fighter Fabio Maldonado.

Matt Mitrione signed with Bellator last year after having all of his previous fights (14) took place in the UFC. He has won both of his fights in Bellator by TKO/KO and he has won five of his last seven fights.

Douglas Lima (28-6) vs. Lorenz Larkin (18-5, 1 NC)
Douglas Lima became the eighth fighter in Bellator history to be a two-time champion as he defeated Andrey Koreshkov at Bellator 164 to regain the Bellator welterweight title. He has won ten of his twelve fights in Bellator and is 7-1 in his last eight fights.

After having ten fights in the UFC, Lorenz Larkin is making his Bellator debut on Saturday night. He enters this fight with back to back victories and is coming off a TKO victory against Neil Magny at UFC 202 (1o months ago).

Michael Chandler (16-3) vs. Brent Primus (7-0)
Bellator NYC will mark the second lightweight title defense for Michael Chandler since becoming a two-time Bellator champion and he enters this fight with four straight victories. He became a two-time champion last year with a knockout victory against Patricky Pitbull and is coming off a split decision victory over Benson Henderson.

Brent Primus made his Bellator debut in 2013 and he enters this fight following back to back split decision victories. His most recent win came in April of last year as he defeated Gleristone Santos at Bellator 153.

Aaron Pico (0-0) vs. Zach Freeman (8-2)
The MMA debut of Aaron Pico will take place in the opening bout of the pay-per-view and if he can live up to the hype, he may go down as the best free agent signing in Bellator history.

The complete Bellator NYC fight card is below.