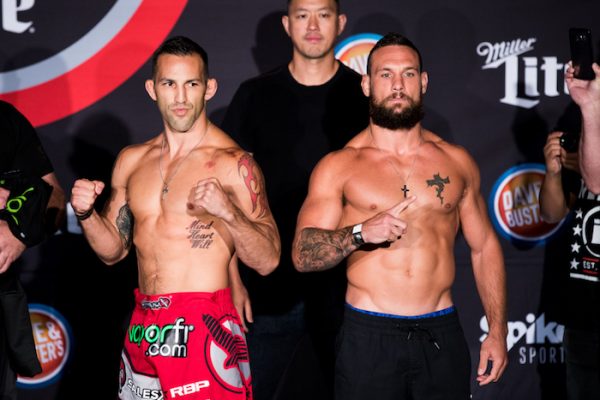 Bellator 181 takes place tonight at WinStar World Casino in Thackerville, Oklahoma and will be headlined by a trilogy bout as Derek Campos meets Brandon Girtz in a catchweight bout of 158 pounds.

In the co-main event of the main card on Spike, John Salter will attempt to make his claim for a title shot in the middleweight division as he meets Kendall Grove and the main card will also see the return of the self-proclaimed “Baddest Man on the Planet” as Joe Warren meets Steve Garcia.

Now let’s take a closer look at the four fights that will take place on the main card of Bellator 181.

Derek Campos (18-6) vs. Brandon Girtz (14-6)
Campos was initially scheduled to headline this fight card against Patricky “Pitbull” Freire. However, Pitbull was recently moved to the main event of Bellator 183 against Benson Henderson and Campos will now have his trilogy bout against Girtz.

Girtz will be looking to snap a two fight losing streak and score his first victory since defeating Campos at Bellator 146 in late 2015. This will be his 11th fight in Bellator and he’s 5-3 in his last eight fights.

Kendall Grove (23-16) vs. John Salter (13-3)
Bellator 181 will mark the first fight for Grove since losing to former Bellator middleweight champion Alexander Shlemenko at Bellator 162 last year. Prior to that defeat, he had won back to back fights and both of those wins came by TKO/KO.

Salter comes into this fight riding a five fight winning streak and is coming off a TKO win in December at Bellator 168 against Claudio Annicchiarico. All of his wins in Bellator have come by stoppage, including a submission win against former Bellator middleweight champion Brandon Halsey at Bellator 156.

Emily Ducote (5-2) vs. Jessica Middleton (2-1)
Ducote was originally scheduled to fight Valerie Letourneau on this fight card, but Letourneau pulled out of the fight late last week. Ducote will be looking for her second straight victory as she is coming off a submission win in March at Bellator 174 against Katy Collins.

Joe Warren (14-6) vs. Steve Garcia (7-1)
Warren will be looking to bounce back tonight as he enters this fight following a majority decision defeat against current Bellator bantamweight champion Eduardo Dantas. He has alternated wins and losses in his last six fights and this will mark his 18th fight in Bellator.

Garcia initially made his Bellator debut in 2015 and scored a victory against Shawn Bunch. He is coming off a decision victory against Ronnie Lawrence at Bellator 162 and he is 5-1 in Bellator.

The complete Bellator 181: Campos vs. Girtz 3 fight card is below.