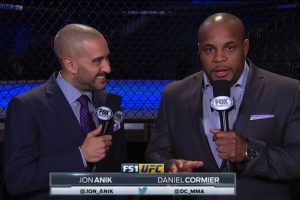 Jeremy Stephens scored a stoppage victory on Saturday night at UFC on FOX 28 and there was controversy about the ending sequence of the fight on whether Stephens landed an illegal knee to Josh Emmett while he was on the ground.

During the UFC on FOX 28 post fight show on FS1, the panel debated the ending sequence of Stephens vs. Emmett. In the video below courtesy of the UFC on FOX Twitter account, Daniel Cormier, Dominick Cruz, and Michael Bisping debated about what happened.

Cormier and Cruz did have a heated debate and it should be noted that Cruz is a teammate of Stephens at Alliance MMA in Southern California. Check out the debate and let us know how you feel about what was said and your comments will be mentioned on Wednesday’s podcast.