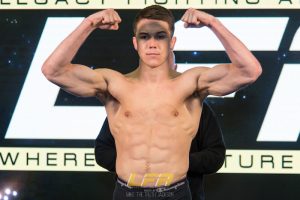 Alexander Hernandez stepped up on eight days notice to face Beneil Dariush at UFC 222 and shocked the mixed martial arts community with a knockout victory in 42-seconds around one of the top fifteen lightweights in the UFC.

The victory by Hernandez (9-1) extended his winning streak to seven fights and he is now ranked at the number thirteen title challenger in the UFC rankings.

On Wednesday, I had a chance to speak to Hernandez about his victory last weekend at UFC 222. Along with talking about the victory over Dariush, I talked to him about his decision to quit his job as a mortgage lender and when he’s targeting his next fight to take place.