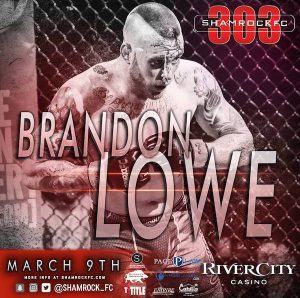 Brandon Lowe will look to extend his winning streak to four fights on Friday night at Shamrock FC 303 as he will face Trevon Crawford in the main event of the fight card coming from the River City Casino in St. Louis, Missouri.

Lowe (3-1) made his professional debut in 2015 at Bellator 145 and was defeated in the first round by Rashard Lovelace. Since that matchup, he has won three in a row including a stoppage victory via punches at Shamrock FC 295 in September against Malcolm Smith.

I recently had the opportunity to chat with Lowe about his matchup on Friday against Crawford and our full conversation is below. During our chat, we talked about the recovery process a fighter has to go through after a tough fight, the origin of his nickname “Quickdraw,” and feeling that he’s a better overall fighter than Crawford.

Shamrock FC 303 will be available via an internet pay-per-view on the promotions website.