Video: Benson Henderson says his dream job was to be a police officer 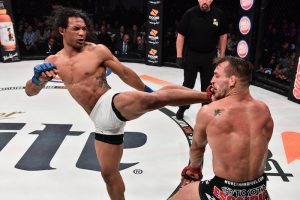 Benson Henderson will step back into the Bellator cage on Friday in Budapest, Hungary as he will be facing Roger Huerta in the main event of Bellator 196, which will air on Friday night at 9 p.m. ET on Paramount Network.

Henderson (24-8) has gone 1-3 in Bellator since signing with the promotion in 2016 and he will look to bounce back after dropping back to back split decision defeats against Michael Chandler and Patricky “Pitbull” Freire.

With his fight set for this week, Bellator has released an episode of “In Focus” with Henderson and at the beginning of the video, Henderson explains how his dream job was to be a police officer.