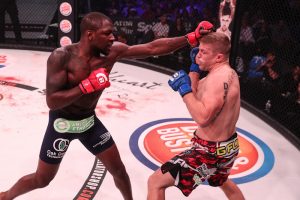 Bellator 196 will take place on Friday in Budapest, Hungary and the main card on the Paramount Network (9 p.m. ET) will feature undefeated prospect Ed Ruth as he will be taking on Ion Pascu in a catchweight bout of 175 pounds on the fight card coming from the BOK Hall.

Ruth (4-0) is coming off a stoppage victory against Chris Dempsey at Bellator 186 and all of his victories have come by TKO/KO. He was initially scheduled to be making his welterweight debut against László Furkó on this fight card, but Furkó pulled out of the fight card early last week due to an undisclosed injury.

During last week’s episode of “The MMA Report Podcast,” Ruth was a guest on the podcast to preview his matchup set for Friday’s Bellator 196. Along with talking about the opponent change, he spoke about his decision to drop down to the 170 pound division.