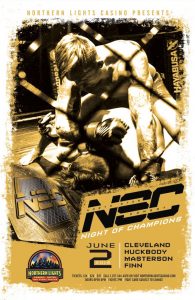 Minnesota based mixed martial arts promotion North Star Combat will be heading to the Northern Lights Casino in Walker, Minnesota on Saturday, June 2 for the promotions debut at the venue and the the fight card is going to see title fights in the featherweight, bantamweight, and middleweight divisions.

In the trio of title fights, Ryle Masterson will take on Ricky Ortiz for the featherweight title, Roman Cruz meets Zach Morrison for the bantamweight title, and Manatua Lemaire will battle Scott Kingbird for the middleweight title. Along with the title fights, the fight card is scheduled to feature RFA vet Marc Hummel, LFA vet Andres Murray, and Legacy vet Jesse Hernandez on the card.

Tickets for North Star Combat: Night of Champions are available at NorthernLightsCasino.com and start at $14. For more information and updates on the event, check out North Star Combat on Facebook and Twitter.