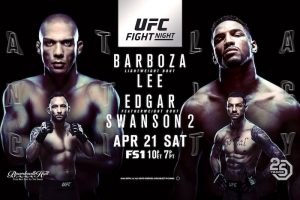 UFC Fight Night 128 will take place tonight at the Boardwalk Hall in Atlantic City, New Jersey and the main card on FS1 (10 p.m. ET/7 p.m. PT) will be headlined by a matchup of top ten lightweight contenders as Edson Barboza will take on Kevin Lee.

The matchup between Barboza and Lee is not a fight that I would call a title eliminator type fight, but the winner will clearly be in a great position as that man will likely be waiting to see what happens with current champion Khabib Nurmagomdov and the former champion Conor McGregor. If the fight between Nurmagomedov and McGregor does happen next, it will seem very likely that the winner of this fight could face Dustin Poirier, Eddie Alvarez, or Tony Ferguson.

For me, this is a tough fight to call. Clearly the key to victory for Barboza is to keep this fight standing and keep his back off the fence. And for Lee, he will want to use his wrestling and stay out of a kickboxing match with Barboza. This will mark the first time we have seen Lee since his defeat against Tony Ferguson for the interim UFC lightweight title and he has been saying he’s healthy. This should be a good matchup and I do favor Lee in the matchup due to the advantage he’s got in the wrestling department.

The co-main event of tonight’s fight card is a rematch in the featherweight division as Cub Swanson will look to even up the score against Frankie Edgar. While you respect the warrior mentality that Edgar has, I wish the UFC would have not made this matchup as it was less than two months ago that Edgar was knocked out for the first time in his career against Brian Ortega at UFC 222. Edgar’s manager, Ali Abdel-Aziz recently said on The MMA Hour that he tried to get Edgar to not take this fight, and it was great hearing Abdel-Aziz say that. I just hope that after tonight’s event, we are not looking at the UFC in why they booked this fight. However, I do not see this rematch going any different that the first fight and I expect a dominating win by Edgar due to his grappling game.