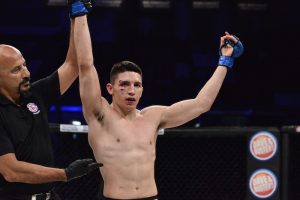 The co-main event of next week’s Front Street Fights 17 in Boise, Idaho will feature former Front Street Fights featherweight champion Vince Morales as he will look to extend his winning streak to six fights when he takes on Nick Mamalis on the fight card coming from the CenturyLink Arena.

Morales (7-1) won the Front Street Fights featherweight title in late 2016 with a stoppage victory in the third round against Andrew Cruz and he vacated the title last year when he decided to move down to the bantamweight division. In his bantamweight debut in January, he defeated two-time WSOF fighter Brandon Hempleman by stoppage in the second round and all of his professional victories have come by stoppage.

I recently had an opportunity to chat with Morales about his upcoming fight against Mamalis in the co-main event of Front Street Fights 17 and watch our complete conversation below as our conversation ranges from getting his start in MMA to the potential of being on the UFC fight card in Idaho this summer.