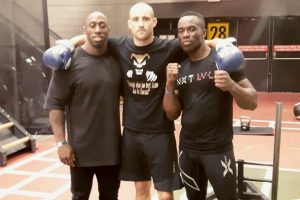 Unified MMA 33 will take place on Friday night at the River Cree Resort and Casino in Enoch, Alberta, Canada and the co-main event of the fight card will be a rematch as Shane “Shaolin” Campbell will defend the Unified MMA lightweight title against Stephen “Big Bad” Beaumont.

Campbell (13-6) is coming off a successful title defense against Mike Scarcello at Unified MMA 32 in September of last year and he enters this matchup following three straight victories. In his first meeting with Beaumont, Campbell won by submission in the opening round at AFC 14 in 2012 and the rematch was initially scheduled to take place in December.

During last week’s podcast, Campbell was a guest on the show to preview his rematch on Friday night against Beaumont and check out Campbell’s complete appearance below.