Video: Jeremy Davis explains what he defines as pressure and what he considers the biggest issue in MMA today 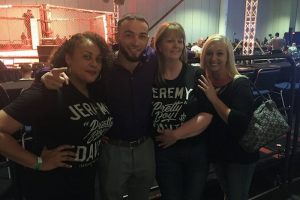 The main event of Saturday’s Battleground MMA in Largo, Florida will be a featherweight bout as Jeremy Davis will look to extend his winning streak when he takes on Carlos Espinosa on the fight card coming from the The Minnreg Hall.

Davis (5-1) enters this fight with back to back victories since dropping his CES MMA debut in 2016 against Peter Barrett. Both of his recent victories have come by submission in the opening round and he’s coming off a victory against Joseph Billingsley at V3 Fights 64 in November.

During this week’s podcast, Davis was a guest on the show to preview his fight on Saturday against Espinosa. Along with previewing his fight, Davis talked about what he defines as pressure and what he considers the biggest issue in MMA today.