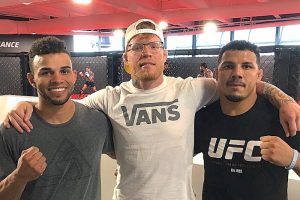 Te Edwards punched his way to a UFC contract earlier this week with a knockout victory in 28-seconds against Austin Tweedy on Dana White’s Tuesday Night Contender Series.

The victory for Edwards (6-1) extended his winning streak to five fight and all of his victories have come in the opening round by TKO/KO. Three of his six wins have now come in under 60 seconds and the victory over Tweedy is now the fastest victory of his career.

On Friday afternoon, I had a chance to speak with Edwards about his victory earlier this week against Tweedy on Dana White’s Tuesday Night Contender Series. During our conversation, Edwards talked about where this victory ranks in terms of his favorite knockouts and when he’s looking to make his official UFC debut.