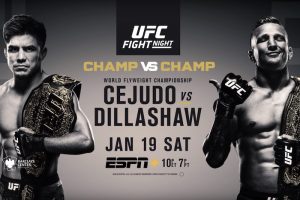 The first UFC event of 2019 took place on Saturday night at the Barclays Center in Brooklyn, New York and was headlined by Henry Cejudo retaining the UFC flyweight title with a 32-second TKO victory against current UFC bantamweight champion T.J. Dillashaw.

Prior to the main event, the main card on ESPN+ saw victories by Allen Crowder, Gregor Gillespie, Joseph Benavidez, Paige VanZant and Glover Teixeira. Overall, nine of the thirteen fights ended in some form of stoppage, including the disqualification win by Crowder in the co-main event against Greg Hardy.

The complete results for UFC Brooklyn are below.