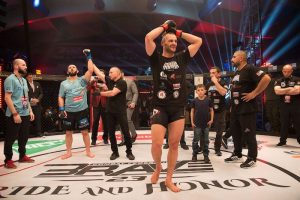 Brave 23: Pride and Honor took place on Friday at the Martyr Rashid Al-Ziyoud Hall Boxing Arena in Amman, Jordan and was headlined by Abdoul Abdouraguimov remaining undefeated with a split decision victory over Jarrah Al-Selawe to win the Brave welterweight title.

In addition to the title fights, the main card of Brave 23 featured the promotional debut of former UFC flyweight Jose Torres and he scored a unanimous decision win over Amir Albazi.

The complete Brave 23: Pride and Honor results are below.