Bellator MMA has been announcing upcoming fights for their eight season and that continued on Friday as the organization announced they will be heading to Charlotte on February 14th for Bellator 89. 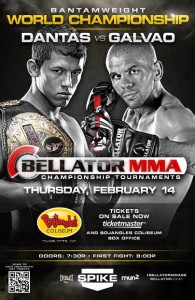 The fight card will come from the Bojangles’ Coliseum and will be headlined by bantamweight champion Eduardo Dantas making his first title defense against Marcos Galvao.

Along with the bantamweight title fight, the main card on Spike TV will feature the quarterfinals of the season eight middleweight tournament.

“Eduardo and Marcos are two of the best bantamweights in this sport, and with the ties they both have to one of the best MMA camps in the world, Nova Uniao, this has the makings of an incredible fight,” said Bellator Chairman & CEO Bjorn Rebney. “We’ve got a stacked Middleweight Tournament featured on the card along with a number of great preliminary fights on Spike.com, so the Charlotte crowd is in for something special on February 14th.”

Dantas (14-3) became the Bellator bantamweight champion earlier this year when he defeated Zach Makovsky by technical submission at Bellator 65. It was his seventh straight victory, with four of those wins coming inside the Bellator cage.

Galvao (13-5-1) earned this title shot by winning the season six Bellator bantamweight tournament, which it was his second appearance in the Bellator tournament. His his other tournament, he had it to the semifinals but was defeated by Alexis Vila. He is currently on a three fight winning streak and is 7-2 in his last nine fights.

Bellator did not announce any of the middleweight tournament fights that will be on the card and those bouts are expected to be announced in the next couple of weeks.