Bellator 149: Dada 5000 talks about Kimbo Slice and why he considers Kimbo a fraud

Dhafir “Dada 5000” Harris will make his Bellator debut in February as he will settle his issues with Kimbo Slice in the co-main event of the fight card coming from the Toyota Center in Houston. 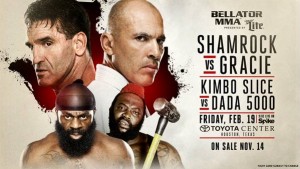 Harris (2-0) has not competed in MMA since 2011 and both of his wins in the sport have come by TKO in the first round.

Bellator recently did a media shoot in Los Angeles to start the promotion of the fight and Harris talked to the media in attendance about his upcoming fight against Slice. He discussed his history with Slice, why he believes he is fighting a fraud, and said this will be the most painful lost for Slice in his career.