The UFC 195 Preliminary Card on FS1 took place this past Saturday night in Las Vegas and featured Michael McDonald scoring a submission win over Masanori Kanehara. 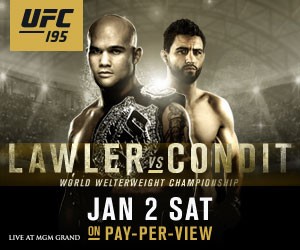 When it came to the sports competition on Saturday night, the night was won by the Alamo Bowl (TCU vs. Oregon) on ESPN with 7,414,000 viewers. The other top sports programming on Saturday was during the day with three bowl games on ESPN, which ranged from 3.6-7 million viewers.

The UFC will return to FS1 next weekend for UFC Fight Night 81: Dillashaw vs. Cruz. The weigh-ins will take place on Saturday from Boston and the televised portion of the fight card will begin at 8 p.m. ET/5 p.m. PT on Sunday.