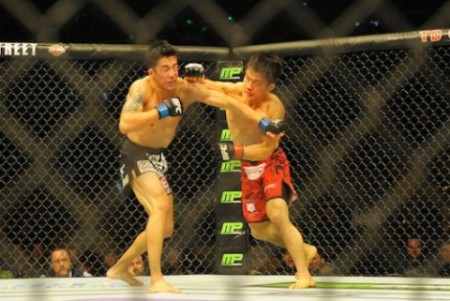 Flyweight Tateki Matsuda was released by the UFC last year after going 0-2 in the promotion and he will be looking for his second straight win outside of the UFC tonight when he takes on Joe Pearson in a catchweight bout at Legacy FC 51 in Minnesota.

Matsuda (11-7) is coming off a decision win against Johnny Campbell at Cage Titans 26 in November and it was his first win since defeating Robbie Leroux by submission at CES MMA 25 in August of 2014.

“Johnny is one of the top fighters in the local New England area,” Matsuda told The MMA Report about his victory over Campbell. “That was the first fight since I got released from the UFC. I was not nervous, but I was in a must-win situation to show where my level is it. To be honest, I won the fight and I was happy. Keep the momentum going and that is how I felt.”

A majority of the fans that will be tuning into AXS TV tonight to watch Legacy FC 51 likely did not see Matsuda’s fight against Campbell in November. They likely just remember seeing his two fights in the UFC and he plans to show everyone watching his fight tonight that he is a totally different fighter now then when he was in the UFC.

“When I was in the UFC, it was the first time to make 125,” Matsuda explained. “In the last fight, it was my first victory as a 25’er and now I have another fight as a 25’er coming up. I am a totally different fighter and a totally different person. Once again, when I made it in the UFC — it was an opportunity to see how many people are behind me. Many people think mixed martial arts looks like an individual sport but without the supporters, I couldn’t make everything in my professional fight career.”

Initially, Matsuda was scheduled to take on Ben Pierre-Saint in a flyweight bout. However, Pierre-Saint is no longer fighting tonight and Matsuda will be facing Pearson in a catchweight bout of 130 pounds. No matter who the opponent is, the goal is always the same for Matsuda as he wants to get the victory and have all of his supporters proud of what he is able to accomplish in the sport.

“In the fight, we never know what is going to happen. But I am going to do my best. All my focus is just on win. I can say after the fight but right now, I can’t say because no one knows,” Matsuda stated on how he will win tonight. “Take the victory home and that is it.”