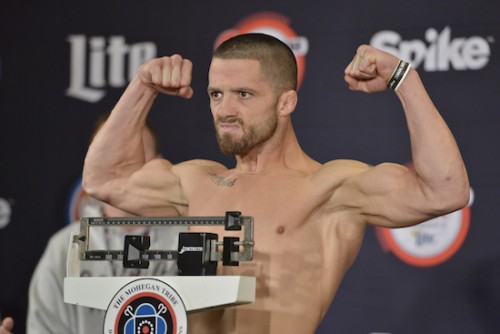 Dennis Olson will look to snap a two fight losing streak tomorrow night when he moves up to the middleweight division to meet former CES MMA welterweight champion Chuck O’Neil in the co-main event of CES MMA 33.

When this fight was initially announced by CES MMA, the narrative of the fight booking was about how Olson and O’Neil training with each other in the past. During today’s edition of “The MMA Report Podcast,” Olson talked about the decision to fight a former training partner.

“Basically, I was told that Chuck had accepted the fight through a guy that kind of manages me,” Olson explained. “I was told he accepted the fight before I was even informed about it. So when I got the call for the fight, I just kind of accepted right off the bat. Assuming that it was basically a situation where I was not being pressured into the fight but when someone comes forward and says that they want a fight with me, I kind of take it not as a personal attack. It’s kind of like someone looking you in the eye and telling that they think they can beat you so they want to fight you. There wasn’t much leading up to the setup of the fight. When it was offered to me and I knew that my opponent had already accepted, I was willing and ready to go.”

Check out Olson’s complete interview from Thursday’s episode of “The MMA Report Podcast” below and be sure to subscribe to the show on iTunes and Stitcher.