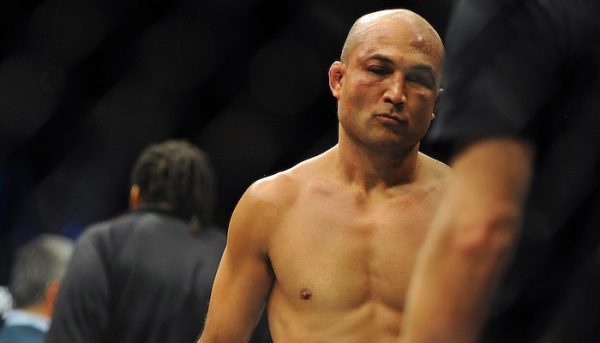 Former UFC lightweight and welterweight champion B.J. Penn was scheduled to return to the octagon next weekend at UFC 199, but Penn has been removed from the event by the promotion due to a potential Anti-Doping Policy violation.

UFC officials announced the removal of Penn from next week’s UFC 199 card in a statement on Monday evening.

“The UFC organization was notified today that the U.S. Anti-Doping Agency (USADA) informed BJ Penn of a potential Anti-Doping Policy violation,” the UFC statement said. “Penn disclosed the usage of a prohibited method – the use of an IV in excess of 50 ML in a six-hour period – during a March 25, 2016, out-of-competition sample collection. In accordance with the UFC Anti-Doping Policy, Penn has received a provisional suspension, and has been removed from his scheduled bout against Cole Miller on June 4 in Los Angeles. UFC will announce a replacement opponent for Miller shortly, and additional information will be provided by USADA and UFC at the appropriate time as the process involving Penn moves forward.”

Following the news of his removal from UFC 199, Penn released a statement on his website and stated that he did not know IV use was banned all year long.

“I voluntarily disclosed to USADA that during a non-fight period that I had an IV administered under the care of a doctor,” Penn stated. “The rule for IV usage had changed since my last fight in the UFC and was unaware of the change and voluntarily disclosed the information to USADA. I had no idea that IV use was banned 365 days a year. At no time in my career in martial arts have I ever doped and anticipate all test results from USADA will come back clean and will be working with the UFC to get the matter cleared up and return to fight as soon as possible.”

The current UFC 199: Rockhold vs. Bisping II fight card is below.