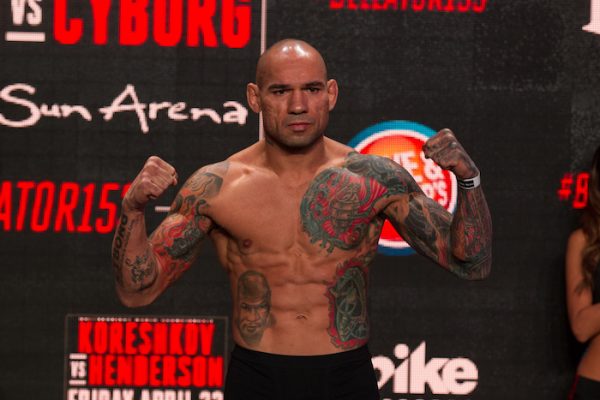 Bellator will be returning to the SAP Center in San Jose, California on Saturday night for Bellator 154 and the event will be headlined by key bout in the light heavyweight division as Phil Davis meets Muhammed “King Mo” Lawal.

Check out a breakdown of the four fights that will be on the main card broadcast on Spike.

Phil Davis (16-3, 1 NC) vs. Muhammed “King Mo” Lawal (19-4, 1 NC)
Davis won the one-night, four man lightweight tournament last year with wins over former Bellator light heavyweight champion Emanuel Newton and Francis Carmont. Both of the victories came by stoppage in the opening round and he is 6-2 in his last eight fights.

Lawal was also in the one night tournament, but he was forced to withdrawal from the tournament due to an injury following his win against Linton Vassell. He enters this fight after winning the Rizin FF heavyweight Grand Prix at the end of 2015 and he is currently on a seven fight winning streak.

Evangelista Santos (21-16) vs. Saad Awad (18-7)
Santos made an immediate impact in the Bellator welterweight division last month when he submitted Brennan Ward by heel hook in 30 seconds at Bellator 153. It was his second straight win and has won three of his last four fights.

Awad is moving up to the welterweight division to take this fight on short notice and this will be his first fight since losing a decision to Patricky “Pitbull” Freire at Bellator 141 last year. The defeat snapped a three fight winning streak and he is 6-4 in Bellator.

Adam Piccolotti (7-0) vs. Ray Wood (7-1)
Piccolotti is considered one of the top lightweight prospects in Bellator and he has gone 3-0 in the promotion. After winning his promotional debut by decision, he has won his last two fights by submission and is coming off a rear-naked choke win against Mario Soto at Bellator 147.

Wood is returning to Bellator after taking a fight outside of the promotion, which was a decision win against Brandon Phillips at Evolution Fighting Championship 3 last month. He won his Bellator debut by TKO in March at Bellator 151 against Chris Jones and he enters this fight with back to back victories.

Andre Fialho (6-0) vs. Rick Reger (7-1)
Fialho did not waste any time in his Bellator debut in February as he scored a knockout victory in 29-seconds against Manuel Meraz. It was his fourth straight victory to come in the opening round and he has only made it out of the opening round once.

Reger is making his Bellator debut and is coming off a TKO win in October against Tramain Smith at Gladiator Challenge and all of his professional victories have come in that promotion. His only career defeat came at the beginning of 2014 at RFA 12 as he was submitted by current UFC fighter James Moontasri.

The current Bellator 154: Davis vs. Lawal fight card is below.