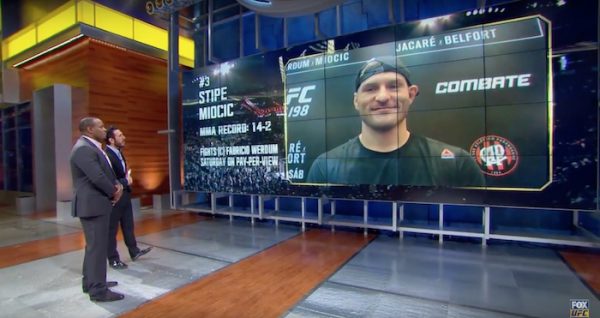 Stipe Miocic: I’m going to dictate where I want it to go

The main event of Saturday’s UFC 198 card in Brazil will be a heavyweight title fight as Stipe Miocic will challenge Fabricio Werdum for the UFC title.

Miocic (14-2) enters this fight with back to back victories and is coming off a stoppage victory against Andrei Arlovski at UFC 195 in January. On last night’s edition of UFC Tonight on FS1, Miocic talked about his fight on Saturday against Werdum and explained that he is going to dictate where the fight goes.

“I’m going to do what I want to do,” Miocic said. “If he wants to go to the ground, that’s fine. I’m a wrestler. I’m going to be smart. Wherever it goes it goes, but I’m going to dictate where I want it to go.”

Check out Miocic’s complete interview from UFC Tonight below.