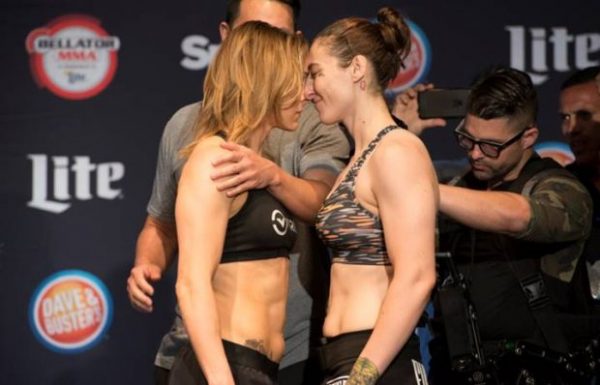 Bellator 155: Alexis Dufresne admits she has a chip on her shoulder heading into Bellator debut tonight

The Bellator debut of Alexis Dufresne will take place tonight at Bellator 155 in Boise, Idaho as she will meet Marloes Coenen in a catchweight bout on the main card broadcast on Spike.

Dufresne (5-2) enters this fight after losing back to back fights in the UFC and she will be looking for her first win since 2014, which was a stoppage victory against Kim Couture. During Tuesday’s edition of “The MMA Report Podcast,” Dufresne admitted that she has a chip on her shoulder heading into this fight and is not worried about what people are saying about her.

“When I went to the UFC, I did not show people what I was really made of and a lot of it was my fault,” Dufresne stated. “I did not train the way I was supposed to be training and I definitely regretted the situation. I can already see people saying, ‘she does not deserve this fight.’ That is fine. They can say what they want. Look at how much Ronda Rousey accomplished and the one time she lost, all of the [expletive] talking people started. It happens so I am not really worried about the negativity part of it. I am not even going to look at it. I am just going to train hard. Go in there. Do the best that I can do and put on a show.”

Check out Dufresne’s complete interview from Tuesday’s edition of “The MMA Report Podcast” below and be sure to subscribe to the show on iTunes and Stitcher.