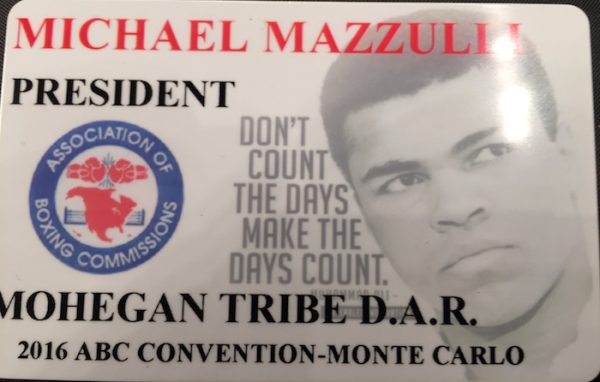 The annual Association of Boxing Commissions [ABC] conference will begin on Saturday in Las Vegas and ABC President Michael Mazzulli has announced that this year’s conference will be dedicated to Muhammad Ali.

“The entire world mourned the passing of the boxing legend on June 3, 2016, and the Association of Boxing Commission’s reason for existence is the enforcement of the federal act referred to as The Muhammad Ali Professional Boxing Act,” Mazzulli said in a press release on Monday. “It seems only fitting to acknowledge his contributions, his courage, and his permanent place as real boxing royalty.”

The ABC board approved a special gift for the membership this year by making a donation to the AliCenter.org and all registrants will receive an original Muhammad Ali t-shirt featuring many of the most iconic of Ali’s photos.

The Association of Boxing Commissions Annual Conference will begin on Saturday at the Monte Carlo Resort and Casino in Las Vegas and will be 60 percent larger than any in the organization’s history. Several notable items will be discussed during this year’s conference including Dehydration and Weight Loss in Combative Sports.

Other key items include:

The updated agenda for this year’s ABC meeting is below.