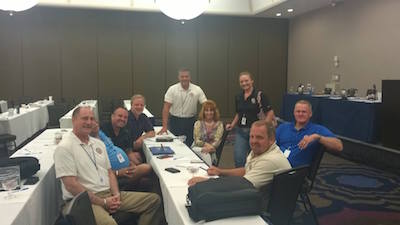 The annual Association of Boxing Commissions (ABC) meeting will take place at the end of the month in Las Vegas and the Mixed Martial Arts (MMA) Rules and Regulations Committee of the ABC will present several rule changes to be voted on by the general body.

The proposals that will be presented to the entire body of the ABC include a new definition for what constitutes a grounded fighter, clearer criteria for judging, the standardization of female fighter apparel, plus the addition and removal of selected fouls for the Unified Rules of MMA.

“When I was named Chairman of this Committee last July by President Mazzuli, my primary goals were to make MMA safer and better,” said MMA Rules and Regulations Committee Chairman Sean Wheelock. “With my fellow nine Rules and Regs Committee members, I feel that we’ve absolutely accomplished this with our new proposals. We have to keep evolving in every aspect of this sport.”

This year’s ABC meeting will also include reports from the Medical Committee. This committee is expected to present information on Dehydration and Weight Gain and what can be and has been done to address it, and other prominent safety concerns. On the boxing side of the Rules and Regulations Committee, they are expected to discuss updating the uniform Rules and safety precautions.

“A great many international Commissions like Mexico and Canada have been a part of the ABC for years, but 2016 is different,” said ABC President Michael Mazzulli. “We have attendees coming from South America and from Europe and I hope the Body will consider how those outside US borders might be allowed to be full voting members (aside from issues relating directly to the Muhammad Ali Act).”

The current agenda for this year’s ABC meeting is below.