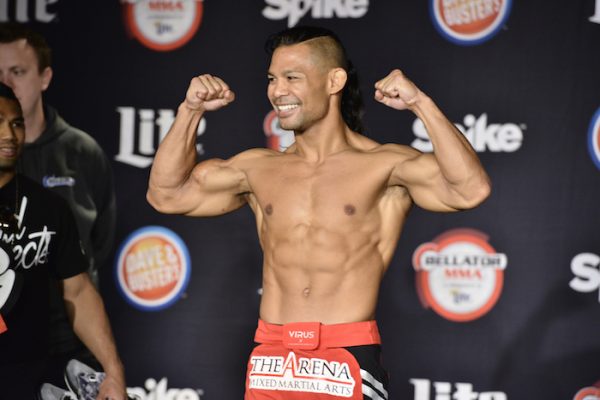 The main event of Bellator 159 will be a title eliminator fight in the Bellator bantamweight division as Joe Taimanglo will look for his fourth win in a row and hand Darrion Caldwell his first career defeat when he meets him on the fight card coming from the Kansas Star Arena in Mulvane, Kansas.

Taimanglo (22-6-1) dropped down to the bantamweight division in 2014 and enters this fight on a three fight winning streak. His most recent win came back in March at Bellator 151 as he defeated Sirwan Kakai and he admitted on yesterday’s edition of “The MMA Report Podcast” that he was surprised and happy when Bellator offered him a fight against Caldwell.

“I was surprised. I was actually happy,” Taimanglo said. “I was like finally this thing happened because I have been showing and telling Bellator that I am the champion. I need this opportunity to show why I am going to be the champion. For them to give me Darrion, it’s been a blessing because Darrion, I believe has the talent of championship already.”

“He defeated a couple of high caliber fighters and a former title holder in Joe Warren,” he continued. “It shows that he has what it takes to be the champion so me fighting him — I am going to show the world that even with his high level of wrestling, I am going to shut it down. I am going to show everybody that no matter what, I am the best fighter in the world. Everybody is going to know Baby Joe Taimanglo at the end of the night.”

Check out Taimanglo’s complete interview from yesterday’s edition of “The MMA Report Podcast” below and be sure to subscribe to the show on iTunes and Stitcher.