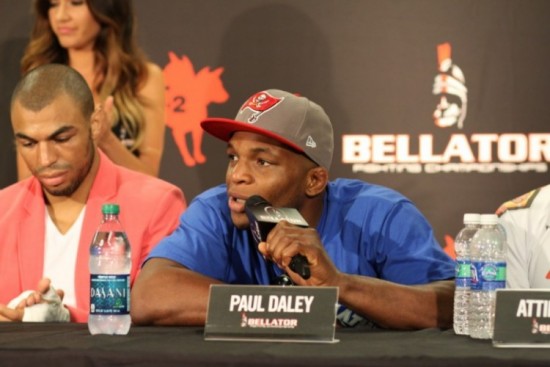 Bellator 158: London will take place on Saturday at the O2 Arena in London, England and will be headlined by a welterweight bout as former Bellator champion Douglas Lima steps into the Bellator cage for the first time since losing the title as he will meet Paul Daley.

Along with the key welterweight bout in the main event, four other fights will take place on the main card that will air in the United States on tape delay at 9 p.m. ET/PT on Spike and in the co-main event, Matt Mitrione will look for his second win in less than 30 days as he will meet Oli Thompson in a heavyweight bout.

Check out the pre-fight stats of the matchups that will be on the main card broadcast on Spike.

Douglas Lima (26-6) vs. Paul Daley (38-13-2)
The last time we say Douglas Lima in the Bellator cage, he lost the Bellator welterweight title against Andrey Koreshkov at Bellator 140. It has almost been one year since the fight with Koreshkov and Lima was scheduled to return four weeks ago at Bellator 157. However, Bellator turned to Lima to face Daley when Josh Koscheck pulled out of the event with an undisclosed injury.

This is the second time that Daley has been scheduled to face Lima as Bellator previously booked this fight to take place last year at Bellator 134. However, Lima was forced to pull out of the fight with a knee injury and Daley would end up defeating Andre Santos by decision on that fight card.

Matt Mitrione (10-5) vs. Oli Thompson (17-8)
The Bellator debut of Matt Mitrione took place last month at Bellator 157 and after weathering an early storm by Carl Seumanutafa, he won by knockout in the opening round. The defeat snapped a two fight losing streak and it was his first win since defeating Gabriel Gonzaga at the end of 2014.

Oli Thompson enters Bellator on a five fight winning streak and has gone 8-4 since exiting the UFC in 2012. He is coming off a TKO win against Fernando Rodrigues, Jr. in December and two of his last four wins have come by TKO in the first round.

Michael Page (10-0) vs. Evangelista “Cyborg” Santos (21-17)
Fans of the Bellator product have been calling for a step up in competition for Michael Page and that will happen on Saturday when he faces Evangelista “Cyborg” Santos. Page is coming off a submission win in April against Jeremie Holloway and five of his six wins in Bellator have come by finish.

Evangelista “Cyborg” Santos will be looking to get back on track when he meets Page in London on Saturday. After winning his Bellator debut in April, he ended up taking a short notice fight and was defeated by Saad Awad at Bellator 156.

Francis Carmont (24-11) vs. Lukasz Klinger (7-2)
Saturday will mark the first fight for Francis Carmont since losing to Phil Davis in the one-night, light heavyweight tournament last year. The defeat snapped a two fight winning streak and he is 2-4 in his last six fights.

Lukasz Klinger is coming off a knockout lost in April against Atanas Djambazov and he has dropped two of his last three fights after starting 6-0. He took this fight on short notice when Linton Vassell pulled out of the fight card due to an injury.

James Gallagher (3-0) vs. Mike Cutting (6-5)
Bellator 158 will be the Bellator debut of James Gallagher as he recently signed an exclusive, multi-fight deal with the promotion. He made his professional debut in October of last year and he enters this fight following a submission victory against Gerard Gilmore at BAMMA 24.

This fight will also be the Bellator debut of Mike Cutting, who has alternated wins and losses in his last eight fights. He enters this fight following a lost, which came against Declan Dalton at BAMMA 24.

The current Bellator 158: London fight card is below.