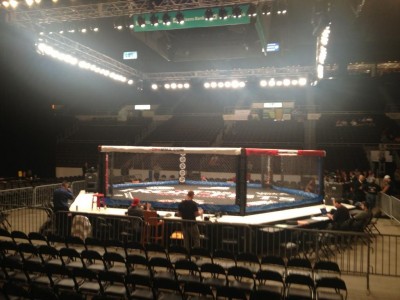 A lightweight bout has been added to the CES MMA 37 preliminary card on August 12 in Rhode Island as Devin Carrier will meet Connor Barry.

The fight booking was announced by CES MMA on Friday.

CES MMA 37 will come from the Twin River Casino in Lincoln, Rhode Island on August 12 and will be headlined by Andre Soukhamthath defending the CES MMA bantamweight title against Kin Moy.

Carrier (1-1) made his pro debut last year and was defeated by Sean Nichols at Cage Titans 26 by decision. He returned to the cage back in April and scored his first professional victory with a stoppage win in the opening round at CES MMA 35 against Wayne Ahlquist.

“Don’t blink! It’s two guys who like to stand in the center and just throw bombs,” Carrier said. “I have a technical edge on him. I’m going to be a lot smarter, and that’s how I’m going to get the win.”

Barry (1-0) will be making his CES MMA debut on this fight card and healso made his professional debut last year. In his pro debut, he scored a decision win against Peter San Antonio at Combat Zone 55.

“Devin is a warrior. I’m a warrior. We’re both 21-year-old kids. And we’re both ready to throw down,” said Barry. “If this fight goes three rounds, it’ll be an absolute war. But I can end it standing up or on the ground, and I can’t wait to put another stoppage on my record and move up that CES MMA ladder.”

The current CES MMA 37: Soukhamthath vs. Moy II fight card is below.