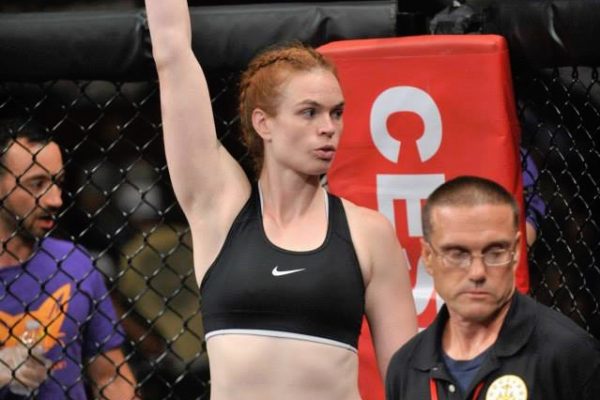 Peggy Morgan: Even when I started, I was very reluctant honestly to fight in MMA

Ultimate Fighter 18 alum Peggy Morgan will be returning to the Invicta FC cage later this month in Kansas City as she will meet Megan Anderson in a featherweight bout on the fight card coming from the Scottish Rite Temple.

Morgan (4-3) is coming off a decision win at CES MMA 30 against Jessica Miele and she has won two of her last three fights. This will be her first fight in Invicta FC since losing to Latoya Walker at Invicta FC 12 last year and she has gone 1-2 in the promotion.

During Wednesday’s edition of “The MMA Report Podcast,” Morgan was a guest on the show to preview her upcoming fight against Anderson at Invicta FC 18. Along with previewing her fight on the weekly podcast, Morgan talked about the current state of women’s mixed martial arts and how there are more opportunities now than when she turned professional in 2012.

“It’s definitely become more mainstream. Obviously, the UFC opening up the women divisions made a hug impact,” Morgan stated. “The fact that Invicta exist and it’s providing this platform for women has been huge. There are more opportunities and there are definitely more girls getting involved. Even when I started, I was very reluctant honestly to fight in MMA because it seemed pretty masculine and kind of — I don’t know, it just seemed very unappealing to me. But when I started doing it, I realized it was fun but I still did not like the image that was associated with it. I feel like that is changing.”

Check out Morgan’s complete interview from Wednesday’s edition of “The MMA Report Podcast” below and be sure to subscribe to the show on iTunes and Stitcher.