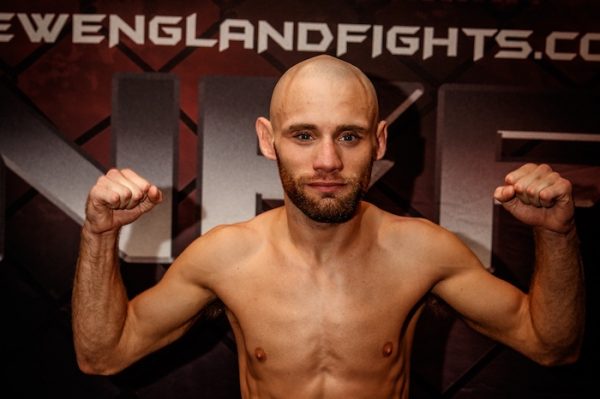 A featherweight bout has been added to the New England Fights 26 fight card on November 19 in Lewiston, Maine as Aaron Lacey will look to remain undefeated when he meets Taylor Trahan.

The fight booking was announced by New England Fights officials on Wednesday.

“Taylor is a seasoned veteran who has competed against the best New England has to offer for a long time,” said Lacey. “He has a vast amount of experience that is going to be hard to surmount. I do, however, believe I have a strong set of skills that can cause him a lot of problems. This one is going to be a scrap! Who knows, maybe another fight of the night!”

Trahan (6-6) snapped a five fight losing streak last month at New England Fights 25 as he defeated Matt Denning by submission in the opening round. The victory was his second career win by submission and first win since 2014.

“I’m looking forward to returning to Lewiston to fight for NEF,” said Trahan. “I’m hoping to put on a good show for everyone and come out with the win.”