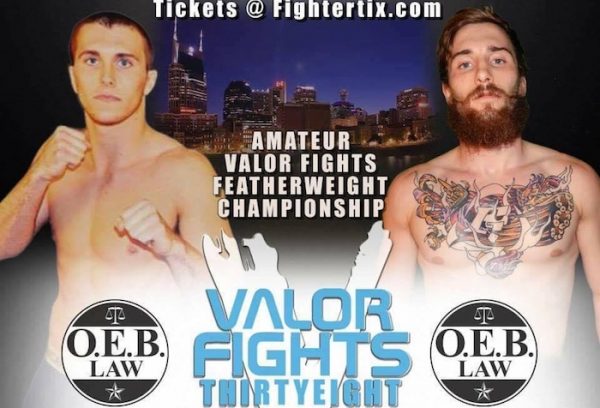 The amateur featherweight title will be on the line next month at Valor Fights 38 as Thomas Wooley will meet Tyler Edwards on the fight card taking place in Nashville, Tennessee.

The fight booking was announced by Valor Fights on Monday.

Valor Fights 38 will come from the Nashville Fairgrounds Arena on November 5 and will be headlined by Zack Hicks meeting Nick Gehrts in a catchweight bout of 150 pounds.

Wooley (2-1) made his amateur debut in early 2015 at Valor Fights 20 and scored a victory against Joel Gordon. He is coming off a decision win against Chase Wender in April at Valor Fights 32 and all of his fights have gone the distance.

“I’ve got family in Nashville — I’m always visiting there. Tyler will definitely be the hometown favorite, but I’m going to have my own army there,” Wooley said. “I’ll have family, friends and my co-workers there. It’s going to be exciting. Who doesn’t love a title fight?”

Edwards (6-2) is coming off a submission win against Daniel Pasons at Valor Fights 36 and he won that fight in the first round by triangle choke.

“This title means a lot more to me,” says Edwards. “I’m a little better now than I was during my other title fights, for one, and Valor Fights is a major organization. I want this belt the most, and I want to obtain it in a dominant fashion. I’ll take a W any way it goes. Either way, my hand will be raised at the end of the fight.”