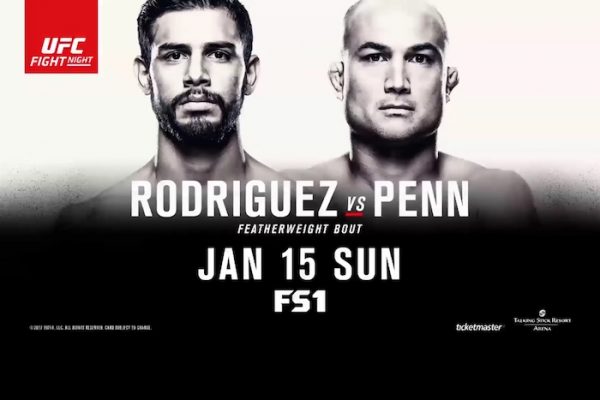 The first UFC fight card of 2017 took place this past Sunday evening at the Talking Stick Resort Arena in Phoenix, Arizona and was headlined by rising featherweight prospect Yair Rodriguez scoring the most notable victory of his career as he defeated former UFC champion B.J. Penn by stoppage in the opening moments of the second round.

Earlier this week, Nielson announced that UFC Fight Night: Rodriguez vs. Penn finished as the number eight sports event in the weekly social content ratings and it was revealed earlier today that the main card on FS1 delivered an average audience of 1,090,000 viewers with the peak viewership coming during the main event (12-12:15a ET) with 1,604,000 viewers.

Other notes on the UFC Fight Night: Rodriguez vs. Penn television viewership:

The UFC will return to FOX Sports next weekend for UFC on FOX 23: Shevchenko vs. Pena and the four fight main card will air on FOX beginning at 8 p.m. ET.