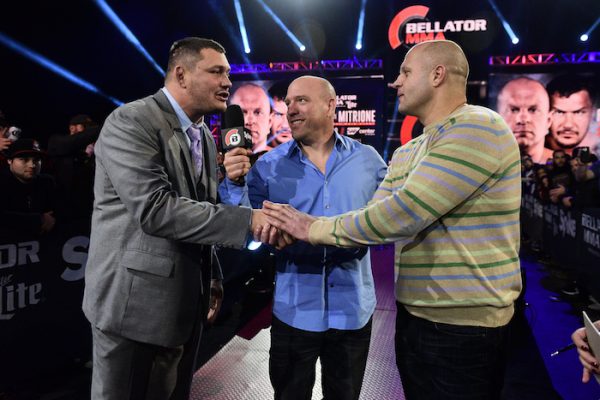 Bellator 172 will take place tonight from the SAP Center in San Jose, California and will be headlined by the promotional debut of Fedor Emelianenko as he will meet Matt Mitrione in a heavyweight bout.

Along with the heavyweight main event, the five fight main card on Spike (9 p.m. ET/6 p.m. PT) will see a key matchup in the lightweight division as Josh Thomson steps back into competition for the first time since the end of 2015 when he meets former Bellator lightweight title challenger Patricky “Pitbull” Freire in the co-main event of the fight card.

Prior to the main card on Spike, the preliminary card on Bellator.com (7 p.m. ET/4 p.m. PT) will feature the Bellator debut of middleweight Anatoly Tokov as he will Francisco France in a catchweight bout of 187 pounds.

Fedor Emelianenko (36-4, 1NC) vs. Matt Mitrione (11-5)
Tonight will mark the first fight for Fedor Emelianenko in the United States since losing to Dan Henderson in 2011. Since that defeat, he has won five fights in a row and is coming off a majority decision victory over Fabio Maldonado at EFN 50.

Matt Mitrione made his Bellator debut last year and has won both of his fights in the promotion by TKO/KO. After defeating Carl Seumanutafa by knockout in the first round at Bellator 157 in his promotional debut, he fought less than 30 days later at Bellator 158 and scored a TKO victory over Oli Thompson in the second round.

Josh Thomson (22-8, 1NC) vs. Patricky “Pitbull” Freire (16-8)
Josh Thomson will be looking for his third straight victory tonight when he meets Patricky Pitbull in the co-main event of the fight card. Thomson made his Bellator debut in the fall of 2015 and both of his victories in Bellator have come by stoppage.

Patricky Pitbull will be looking to bounce back tonight against Thomson after losing to Michael Chandler at Bellator 157. The defeat against Chandler snapped a two fight winning streak and Patricky has gone 6-3 in his last nine fights.

Oli Thompson dropped his Bellator debut last year against Matt Mitrione and the defeat snapped a five fight winning streak. During that winning streak, two of the five wins came by TKO in the first round and he is 8-5 since exiting the UFC in 2012.

Veta Arteaga (2-1) vs. Brooke Mayo (0-0)
Veta Arteaga made her Bellator debut last year at Bellator 155 and scored a decision victory against Jackie Vandenburgh. She returned to the Bellator cage four months later at Bellator 161 and lost a split decision against Anastasia Yankova.

After having ten amateur fights, Brooke Mayo will make her professional debut tonight at Bellator 172. Her last amateur fight came in July of last year and she defeated Mayra Mazza by stoppage in the third round at Get Down Fights 22.

Josh Koscheck (17-10) vs. Mauricio Alonso (12-7, 1NC)
After being on the sidelines due to injury, Josh Koscheck will make his Bellator debut tonight when he takes on Mauricio Alonso. He will be looking to snap a five fight winning streak and score his first victory since early 2012.

Mauricio Alonso lost his Bellator debut in 2015 against Nick Pica at Bellator 142 and since that fight, he has won back to back fights. Both of those victories have come by unanimous decision and his most recent victory came in August at Dragon House 23 against Justin Baesman.

The current Bellator 172: Fedor vs. Mitrione fight card is below.