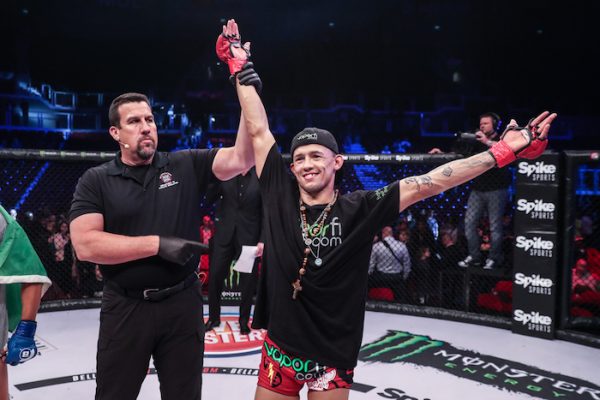 Bellator 184 takes place tonight from the Winstar World Casino in Thackerville, Okalhoma and will be headlined by a title fight as Eduardo Dantas defends the bantamweight title against Darren Caldwell.

Along with the bantamweight title fight, the fight card will feature the return of two former Bellator featherweight champions as Daniel Straus steps back into the Bellator cage for the first time since losing the title earlier this year as he meets Emmanuel Sanchez and Pat Curran returns for the first time in sixteen months as he takes on John Teixeira.

Now let’s take a closer look at the four fights that will take place on the main card of Bellator 184.

Eduardo Dantas (20-4) vs. Darrion Caldwell (9-1, 1NC)
Bellator 184 will mark the second title defense for Eduardo Dantas since becoming a two-time Bellator bantamweight champion last year. He enters this fight on a four fight winning streak and is coming off a split decision win against Leandro Higo in a non-title fight.

Darrion Caldwell is coming off a decision win against Joe Taimanglo at Bellator 167 and he was initially scheduled to challenge Dantas for the title earlier this year. However, Caldwell had to pull out of the fight due to an undisclosed injury and this will be his first fight in ten months.

Daniel Straus (25-7) vs. Emmanuel Sanchez (15-3)
Daniel Straus is a two-time Bellator featherweight champion and this will be his first fight since losing the Bellator 145 pound title earlier this year against Patricio Pitbull. Since that matchup, Straus has changed his training team as he left American Top Team and joined the Combat Club.

Emmanuel Sanchez has won back to back fights and is 5-1 in his last six fights. His last six wins have come by decision and he’s coming off a unanimous decision victory over former Bellator bantamweight champion Marcos Galvao.

Pat Curran (22-7) vs. John Teixeira (21-2-2)
The last time we saw Pat Curran, he scored a decision victory against Georgi Karakhanyan at Bellator 155 (504 days ago) and he’s won back to back fights. Both of his recent victories have come by decision and his last stoppage victory came in 2014 against Daniel Straus at Bellator 112.

John Teixeira made his Bellator debut in 2014 and started his Bellator run with five straight victories. In his last matchup, his winning streak was snapped as he lost a decision against Daniel Weichel at Bellator 177.

Leandro Higo (17-3) vs. Joe Taimanglo (23-7-1)
Leandro Higo signed with Bellator earlier this year and ended up facing Eduardo Dantas on short notice at Bellator 177. He ended up losing a split decision against Dantas and the defeat snapped an eight fight winning streak.

The current Bellator 184: Dantas vs. Caldwell fight card is below.