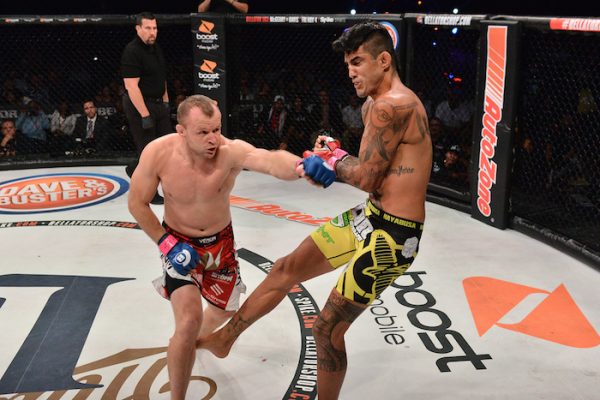 Bellator 185 takes place on Friday night from the Mohegan Sun Arena in Uncasville, Connecticut and will be headlined by a middleweight bout as Gegard Mousasi makes his promotional debut against former Bellator middleweight champion Alexander Shlemenko.

Along with the middleweight main event, the co-main event of the fight card will see Neiman Gracie looking to remain undefeated when he meets Bellator newcomer Zak Bucia. Plus, the main card on Spike will have three other bouts as the matchups are Heather Hardy vs. Kristina Williams, Ryan Quinn vs. Marcus Surin, and Ana Julaton vs. Lisa Blaine.

Now let’s take a closer look at the five fights that will take place on the main card of Bellator 185.

Gegard Mousasi (42-6-2) vs. Alexander Shlemenko (56-9, 1NC)
Bellator signed Gegard Mousasi to a multi-fight deal earlier this year and he enters the promotion on a five fight winning streak. His last four wins have come by TKO and he’s coming off a victory against former UFC middleweight champion Chris Weidman at UFC 210 in April.

Alexander Shlemenko is unbeaten in his last seven fights and this will be his first fight in Bellator in nearly one year as he defeated Kendall Grove at Bellator 162 in October of last year. During his unbeaten streak, three of the wins have come by stoppage and his most recent victory came in June at M-1 Challenge 79 as he defeated former Bellator middleweight champion Brandon Halsey by TKO in 25-seconds.

Neiman Gracie (6-0) vs. Zak Bucia (18-8)
The Bellator debut of Neiman Gracie took place at the beginning of 2015 at Bellator 134 and three of his four wins in Bellator have come by submission. He’s coming off rear-naked choke submission win in June at Bellator NYC against Dave Marfone and this will be his second fight of 2017.

Zak Bucia was recently signed by Bellator after being the Shamrock FC welterweight champion and he enters Bellator on a three fight winning streak. Two of his last three wins have come by stoppage and this will be his second fight in less than 30 days as he defeated Aaron Highfill by armbar submission at Shamrock FC 295 last month.

Heather Hardy (1-0) vs. Kristina Williams (0-0)
The mixed martial arts debut of Heather Hardy came earlier this year at Bellator 180 and she scored a TKO victory over Alice Yauger in the third round. She is a Brooklyn native and is known in the boxing world as she is the current WBC international female featherweight champion.

After having three amateur fights, Kristina Williams will be making her mixed martial arts professional debut on Friday at Bellator 185. All of her amateur fights have taken place this year and this will be her first fight since defeating Taylor Price in July at HD MMA 9.

Ryan Quinn (13-7-1) vs. Marcus Surin (4-0)
Bellator 185 will mark the ninth fight in Bellator for Ryan Quinn and he’s coming off a decision lost against Saad Awad in April at Bellator 178. The defeat snapped a two fight winning streak and he’s 6-3 in his last nine fights.

Marcus Surin made his professional debut and 2015 and this will be his Bellator debut. He’s coming off a TKO victory against Christian Torres at WSOF 31 last year and three of his four wins have come by stoppage.

The current Bellator 185: Mousasi vs. Shlemenko fight card is below.