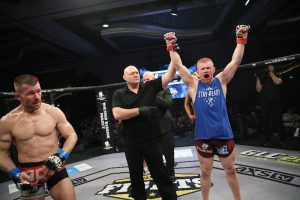 The co-main event of Friday’s LFA 41 will be a lightweight bout as Bobby Lee will look for his ninth career victory when he meets undefeated Brazilian Killys Mota on the fight card coming from the Mystic Lake Casino Hotel in Prior Lake, Minnesota.

Lee (8-1) has won back to back fights by decision and he’s gone 3-1 in LFA. His most recent win came in March at LFA 34 against Nick Ammerman and his only lost in his career came against Jeff Peterson by decision last year.

During last week’s podcast, Lee was a guest on the show to preview his matchup on Friday against Mota. Along with previewing his fight, Lee talked about missing weight in his last fight and his interest level in a rematch against Peterson.