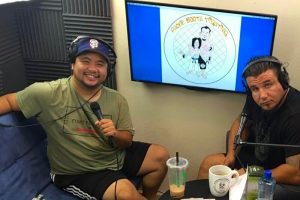 UFC 224 and Bellator 199 took place this past Saturday night and this week on The MMA Report Podcast, Jason Floyd and Daniel Galvan recap both events. Along with recapping those fight cards, Jason has conversations with Angelo Reyes, Daron Cruickshank, and Blake Bilder.

In the opening round of this week’s podcast, Jason and Daniel discuss what happened last Saturday in Brazil at UFC 224 including the Raquel Pennington situation. After they gave their thoughts on that topic, Jason chats with Boxing/MMA coach Angelo Reyes to get his feelings on what happened with Pennington saying “I’m done” after the fourth round.

Up next, Jason has conversations with Daron Cruickshank and Blake Bilder. Jason speaks with Cruickshank about his recent victory in Rizin and Bilder joins the podcast to discuss his career to this point. Following those interviews, the guys preview this weekend’s UFC Fight Night 129 and discuss a couple of MMA news items including Yair Rodriguez being released by the UFC and former UFC champion Chuck Liddell announcing he’s planning a comeback.