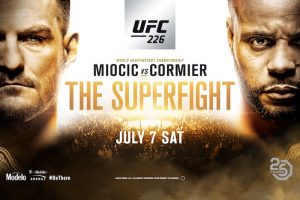 This fight has been labeled as a “super fight” by the UFC and I know there are some fans that have tweeted to me that if you call it a “super fight,” it’s not likely a true “super fight.” With that being said, this fight will likely go down as one of the biggest UFC fights of 2018.

This fight will mark the 4th UFC heavyweight title defense for Miocic and this will be the first heavyweight fight for Cormier since 2013 when he defeated Roy Nelson by decision at UFC 166. During fight week, Cormier has noted that he’s never lost a wrestling or MMA fight at heavyweight. However, Cormier has not faced a heavyweight like Miocic in MMA.

What intrigues me about this fight is two things: Can Cormier make history in winning a UFC title in two weight classes and will Miocic use his eight inch reach advantage effectively. Cormier does a tremendous job of coming forward and this is not the first time in his career that he will enter the fight with a large reach disadvantage.

If Cormier pulls out the victory, I believe it will be due to getting this fight against the fence and using his clinch. This is also where Cormier likes to get his takedowns. If this fight is at range, I just do not see Cormier being able to pull out the victory. I do believe this fight will go all twenty-five minutes and I look for Miocic to retain the UFC heavyweight title with a unanimous decision victory.