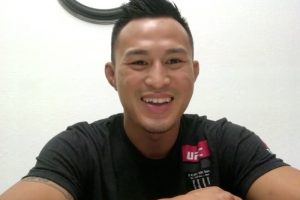 This week on The MMA Report Podcast, Jason and Daniel give their thoughts on what’s going on in mixed martial arts and Jason has interviews with Andre Soukhamthath, Louis Smolka, Westin Wilson and Hilarie Rose.

At the start of this week’s show, Jason tells you about the drug test results and medical suspensions for Bellator 207, which took place earlier this month in Connecticut. Up next, Jason and Daniel discuss the Instagram post by Conor McGregor about his thoughts about his fight against Khabib Nurmagomedov.

After their discussion on McGregor’s social media post, the guys hit on what happened at PFL 10 and the upcoming PFL 11 card on New Years Eve in New York City. Then it’s on to the interview portion of the show as you will hear Jason’s conversations with Andre Soukhamthath, Louis Smolka, Westin Wilson and Hilarie Rose.

Following the interviews, Jason and Daniel preview this weekend’s UFC Fight Night card in Canada and wrap up the show by discussing whether or not we will see former Bellator and ONE Championship champion Ben Askren fight in the UFC in the next six months.