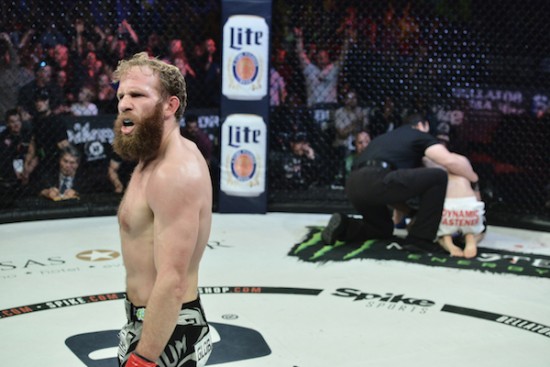 Bellator 150 took place on Friday night at the Kansas Star Arena in Mulvane, Kansas and the card was headlined by Cheick Kongo scoring a split decision victory over Vinicius “Spartan” Queiroz in a heavyweight bout.

According to Nielson sources, Bellator 150’s preliminary live average viewership landed at 733,000 viewers and this is the best viewership for a non-tent pole event for Bellator in eight months.

When it came to the sports competition on Friday night, the Bellator fight card went up against the a doubleheader of NBA games on ESPN. The early game (8:05-10:35 p.m. ET) between the Chicago Bulls and the Atlanta Hawks drew 1.074 million viewers, while the late game (10:35-12:56 a.m. ET) between the Memphis Grizzlies and the Los Angeles Lakers drew 964,000 viewers.

Bellator will return to Spike TV on Friday for Bellator 151 and the event will be headlined by former featherweight and bantamweight champion Joe Warren as he returns from suspension to meet undefeated prospect Darrion Caldwell.